Jackbox is truly a series of games that caters to everyone: ranging anywhere from perfectly wholesome to straight-up adult, vulgar sessions depending on the demographics. Its versatility and its capability of hosting an eight-person party game is what truly makes Jackbox a must-have for quarantine, in which human contact is limited.

Jackbox, as mentioned, is a series of party games meant for 3-8 people to play, and is divided into six party packs, each costing anywhere from $25-30 on Steam (cheaper offers might be available on third-party websites). Going into the menu, the first impression you get is an array of games shown on the store’s webpage. How you play the game with other people is fairly simple. There are a variety of ways to broadcast the game, either through streaming or screen sharing. One person will open up a game they choose. Then a room will show up along with the instructions to go to a website called jackbox.tv and then every participant types in the code provided. The first person to join the room will be considered the VIP and will be the person to decide whether the game can start, start a new game with the same players or new players after a game ends. A usual game of the Jackbox series will range anywhere from 15-40 minutes and the replayability for each game is usually very high. 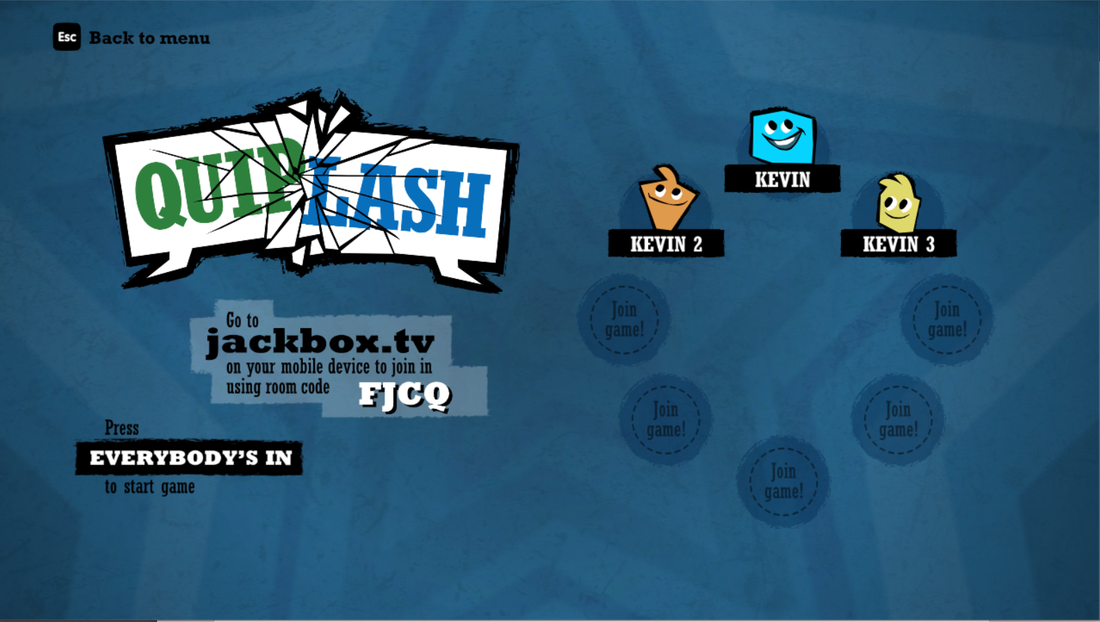 Example of a Jackbox waiting room, with instructions and code provided
Each game that the party packs offered contains a vastly different premise and theme. Let’s take Mad Verse City. Players will choose a noun, a verb, and an adjective based on the request of the game. They will proceed to write rhymes with a default sentence that the game provides along with the verb. After around a minute, robots will perform the “rap” that players made. Then other players will vote based on how good the rhyme is. Mad Verse City works on a three-round basis, and the one that ends up with the most money wins.

Another game of this series is called Patently Stupid. The game is based on idea of inventing something, then obtain enough funding to launch the project. For the first round, players will get to write different prompts, then they will get to draw a random prompt that other players provided, along with the title of the invention and a catchy tagline. Players will then present their inventions, either by themselves or let the narrator present the inventions for then. After the presentation, players will get to “invest” in the invention they like the most, with the most value for the invention they like the most, and the least value for the one they like the least. Any invention that surpasses the status quo gets bonus funding. The second round works almost the same way except that one player will choose a prompt for everyone to draw.
If you don’t mind the price tag for each party pack, then Jackbox is a must have considering the quarantine situation that everyone is going through. Each game can provide almost an endless amount of fun and it ties everyone together in these trying times. For a party game series, Jackbox is certainly well thought-out, catering to everyone of all age demographics.