​Students get more applause than faculty 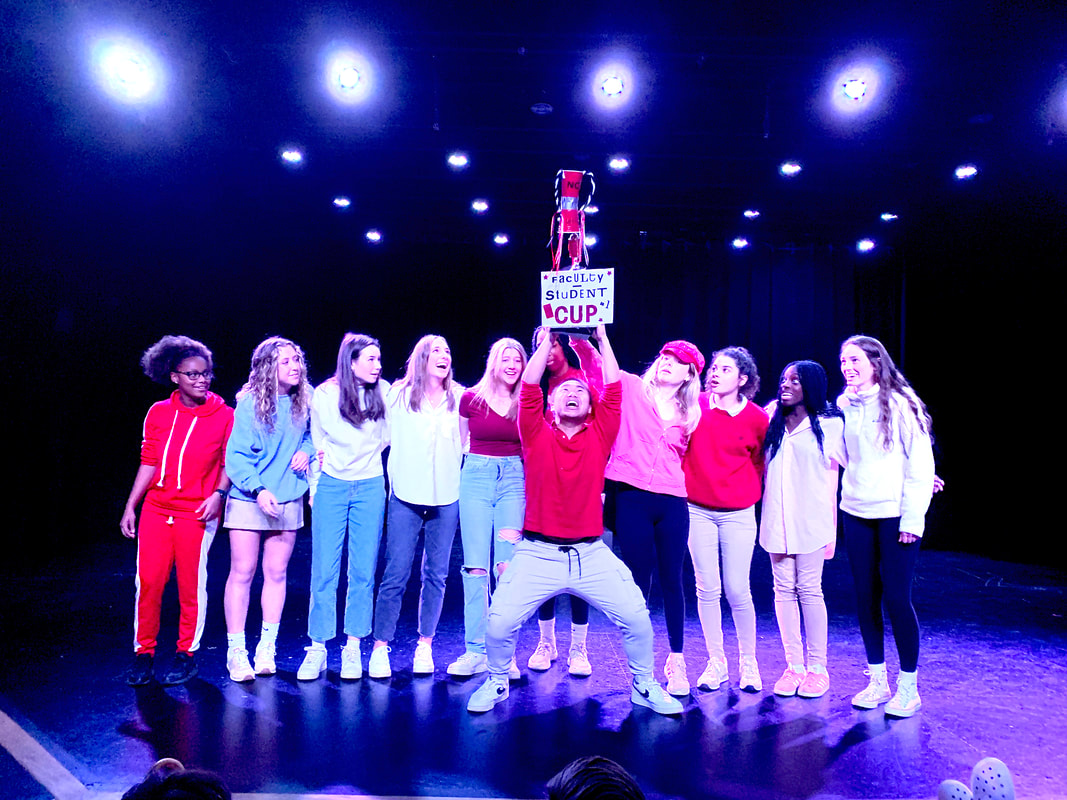 For the second Student Faculty Cup of the year, North Cross held its first ever lip sync competition.
“Just being able to have fun in the auditorium with everybody there again, it just felt like things were getting back to normal and we were all able to be in the same place,” says Dr. Tim Naginey, one of the teachers that participated in the competition.
The groups that performed in the competition ranged from 9th graders all the way to faculty members. There was one group representing the freshman class, two groups of sophomores, one group of juniors and two senior groups. The winning group among the students later went on to battle against the faculty team. The winner of both the student groups and against the faculty was a 10th grade group performing “Status Quo” from High School Musical.
“It was surprising,” says Dami Bankole, a one of the group members of the winning team, “We didn’t think we would win.”
According to Bankole, it only took about one full lunch period and half of another one to perfect their dance routine. Bankole also says that Selden Burns and Cate Cook were the main people that gathered the group together. It was an event for SCA. The whole group consisted of Bankole, Burns, Cook, Dajah Garrison, Nadia Hosny, Ansley Ayers, Teea Hash, Kathryn Hancock, Alexis Teter, Elinor Blackshaw and Danny Phung. In addition to her own group, Bankole says her favorite performances were the senior group that lip synced “Gold Digger” by Ye because of how entertaining it was and the other sophomore group that performed “Careless Whisper” by George Micheal because of its comedic factor.
“We had a lot of fun doing the little part at the beginning, that was probably my favorite part,” Bankole said, “And the part where she got food thrown on her, that was pretty funny. I didn’t know we were using real food until she actually, like, threw it on her.”
Meanwhile, Naginey says that their entire dance routine was all improv and they had no dance practice prior to the performance. Mistie Dickenson, the biology and environmental studies teacher, was the mastermind behind the group, being the one to gather the teachers up to perform. A few teachers, such as Chris Brandon and Stephen Belderes, joined at the last minute and hopped on stage for the actual competition. Similarly to Bankole, Naginey’s favorite performance was the “Careless Whisper” group, saying that it was hilarious.
“I think the sense of community where all the grades and all the teachers are all getting on stage and embarrassing themselves really brings everyone closer together,” Naginey says, “Having fun with the kids, it’s really good, I think it’s really important. It’s one of the great things that North Cross does, they try to encourage the sense of community with everyone, not just students but students and teachers together.”

Top 10 shows (that I watched on Netflix):

In the world of television shows, there are many beautiful creations, but the following are my most memorable ones.
10. The Letter for the King
The Letter for the King, a Netflix Original series released in 2020, depicts the story of a boy who must deliver a secret letter to the King. With only six episodes, the directors, Alex Holmes and Felix Thompson, were able to tell an adventurous tale taking place in medieval times for kids.
9. Alexa & Katie
Alexa & Katie, also a Netflix Original series, is a story about a high school girl, Alexa, who suffers from cancer, and her best friend, Katie. Each episode is a new experience that the friends go through together, and each of the four seasons is a year of their highschool careers.
8. iCarly
iCarly aired on Nickelodeon from 2007 - 2012. It is set apart from other television shows because it is a show about a show. It follows the story of a group of friends that start an internet show, iCarly. The series became very popular in 2010, and certainly holds some nostalgia for people who used to watch as kids. It appealed to many because, growing up surrounded by the internet, kids wanted to start their own channel on YouTube or start an internet show like iCarly.
7. Stranger Things
Stranger Things is a Netflix Original series, based on a conspiracy theory, about a group of kids discovering a government cover-up during the Cold War. The show’s first season was released in 2016 and the fourth season is set to come out in mid-2022. The viewers are able to see the child actors grow up in front of them, on screen.
6. The Umbrella Academy
The Umbrella Academy, first released in early 2019, shows the story of seven children with extraordinary gifts, who are adopted by the billionaire owner of the academy. With two seasons, this Netflix Original series was fairly well received. It is different from most superhero shows, depicting the academy as a big family with unhealthy relationships.
5. The Dragon Prince
The Dragon Prince, another Netflix Original, is the first animated series on this list. Following the story of princes and elves trying to end the long standing conflict between their nations, the show’s target audience was kids ages 9-12, though it can be enjoyed by all ages. It has a positive representation of different sexualities, disabilities and races.
4. A Series of Unfortunate Events
A Series of Unfortunate Events, also a Netflix Original series, is a dark story about three siblings being followed around by the villainous Count Olaf, who will do anything to get the large fortune that their parents left for them. In every episode, the fourth wall is broken by the narrator, Lemony Snicket, and the audience is warned of the sad tales they will see.
3. She-Ra and the Princesses of Power (2018-2020)
She-Ra and the Princesses of Power, a Netflix Original animated series, is a reboot based on another series made in 1985. It follows the story of a group of teenagers who have to save their planet against the Horde. She-Ra is seen as a powerful role model for many women and girls. The series is one of the few children’s shows with LGBTQ+ representation, which is impactful for many.
2. Anne with an E
Anne with an E was based on the book Anne of Green Gables and portrays the story of a young girl, Anne, who is trying to adapt to life with her new adoptive parents. Taking place in the late 19th century, the show was able to accurately show many societal issues, like racism and gender inequality, during that time. In addition, the show brings awareness to the residential schools that Native American children were forced into, away from their families, and never seen again.
1. Avatar the Last Airbender
Avatar the Last Airbender aired on Nickelodeon from 2005 - 2008 with three seasons. It is a story about three nations, Earth, Water and Air, that have been attacked by the Fire nation for the past century. Each nation has its own benders, in other words, people born with their nation’s powers. There are firebenders, waterbenders, airbenders, and earthbenders, but only one master of all the elements, the avatar. The avatar must stop the war and bring peace to the world. Though this series was targeted towards a younger audience, it can appeal to teens or adults because there are some interesting small details. For example, the fighting styles of each group of benders are based on real life fighting styles, which match with the characteristics of the nation. Water benders are seen using Tai Chi, which is characterized by control rather than aggression.